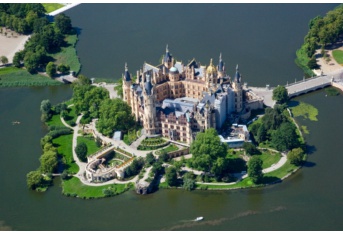 A management plan for a world heritage site is a regulatory framework in which the future handling and long-term development of the site is laid down to insure protection, conservation, sustainable use and development. Since the 1st of February 2005, a management plan is required of an inscribed property.

Main elements of a management plan are the following:

The description of the outstanding universal value, OUV, of a world heritage site and the statement of its authenticity and integrity are placed in front of its management plan.

Boundaries of the nominated property and buffer zone

Area of the application for the German tentative list

In May 2017, the advisory board for the Schwerin World Heritage application has decided to enlarge the proposed property. The advisory board installed by the Ministry of Cultural Affairs of Mecklenburg – Western Pomerania has added the area of the Pfaffenteich due to its functional buildings of the Schwerin residence. Furthermore, the council has decided to combine the exclaves in a single area.

Area of the application for the German tentative list: 140 ha

Multiple visual relationships are fundamental to a Romantic cultural landscape: Ever new surprising viewpoints and elements lurking the spectator further into the landscape only to open more views of the quaint and picturesque nature.

Stefan Pulkenat has analysed the view relationships of the Residence Ensemble Schwerin for the application for the German tentative list in 2012.

A profound field-of-view study is a required part of the management plan of a World Heritage site. Dr. Michael Kloos, planning and heritage consultancy, has prepared a pre-evaluation in 2016, the second phase of the study is ongoing.

The Schwerin World Heritage Conferences were established in 2015in the context of a sustainablle management plan. They should secure continuous research on the potential World Heritage site Residence Ensemble Schwerin – Cultural Landscape of Romantic Historicism“. Furthermore, they ensure the possibility to follow the path towards World Heritage for citizens as well as visitors of Schwerin.