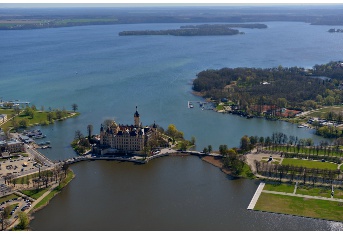 The Residence Ensemble Schwerin – Cultural Landscape of Romantic Historicism was included on the German tentative list, the list of proposals for UNESCO World Heritage, in 2014. It is located in the western part of the German State of Mecklenburg – Western Pomerania in midst a Romantic landscape of lakes and gardens.

The heart of the ensemble is the residential castle on its island. It combines the surrounding natural environment with the urban city in a unique way.

It is a testimony to the last flourishing of Court culture in the 19th century with its representational and functional buildings such as the Grand Ducal Museum, Theatre, the Princes Palaces, the Cabinet building, the Ducal Stables, as well as the Court steam laundry or the Ducal linnen and bedding chamber.

The Ensemble and the surrounding landscape reflect thousand years of history of the Ducal house of Mecklenburg up to their ancestors, the Slavic tribe of the Obotrites. The churches in Schwerin, such as the St. Paul’s Church, the Castle’s Chapel, the Cathedral and the Schelfkirche, also tell of the Ducal claim to power by divine right.

The Residence Ensemble Schwerin – Cultural Landscape of Romantic Historicism is as “built history” a unique testimony to a period of social upheaval. At the site where once the Dukes of Mecklenburg resided, the State parliament of Mecklenburg – Western Pomerania began its work in 1990. Thus, the former Princely seat evolved to the modern centre of democracy. Thus the former princely seat developed into today´s centre of democracy.

With the inclusion on the German tentative list in June 2014, the nomination dossier of Schwerin has to be prepared, its outstanding universal value for the whole of humanity defined and brought into the world. The application is supported on a partnership basis by the State Capital Schwerin as well as by the State of Mecklenburg – Western Pomerania and its State parliament.

A broad social commitment supports and accompanies the application procedure in a unique way. Already in the year 2002, the society PRO Schwerin has set the ball rolling. Since then, many of the Schwerin civil societies, initiatives, clubs and groups support the project. In 2015, the Welterbe Schwerin Förderverein has been founded with the purpose to promote the application.

Various events take place to further research and excitement for this unique cultural heritage - as for instance the annual Schwerin World Heritage Conferences.