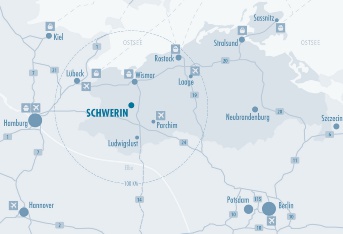 Thanks to its proximity to Hamburg, the Baltic Sea region with the seaports of Wismar and Rostock (A 20 motorway) as well as the Capital of Germany Berlin (A 24 motorway), Schwerin enjoys the advantage of lying "right in the middle" from a logistical perspective. The extension of the A 14 motorway will close the North-South axis, thereby also making the southern regions even easier to reach. A well developed railway network – plus the Schwerin- Parchim, Hamburg-Fuhlsbüttel and Rostock-Laage airports – provide for an excellent transregional accessibility of the location.

More informations about work and living 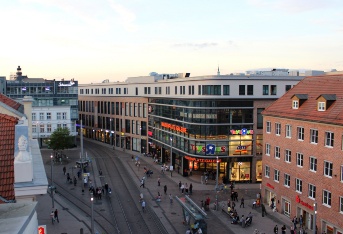 The cityscape is defined not only by diverse types of businesses but also the preservation of the individual identity of the state capital's city centre with its top-quality historical architecture, together with its mixture of owner-owned, regional specialist stores and international chain stores.

Schwerin is part of the metropolitan region 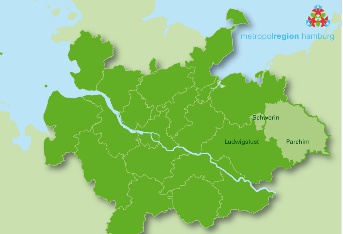 Since the end of February 2017, Schwerin has been a member of the Hamburg metropolitan region, thereby becoming part of one of the strongest economic regions in Germany. The Hamburg Metropolitan Region comprises 4 federal states, 17 administrative districts, three district-free cities as well as 12 economic and social partners. It encompasses an area of some 28,500 square kilometres containing 5.3 million inhabitants. The metropolitan region is the economic powerhouse in the north of Germany. An excellent infrastructure, innovative companies, prestigious research facilities and a broad university network are just a few of the pluses.

Schwerin already benefits from cooperation in, for example, the marketing of industrial and commercial sites. In addition, tourist projects, such as the Garden Trail and the Musical Gardens, have already been jointly realised.

In addition to its economic strength, the Hamburg Metropolitan Region has an enormous quality of life to offer: the hustle and bustle of cities, historical city centres, nature at its best, palaces, manor houses, beautiful lakeland scenery and coasts. The metropolitan region is a paradise for fans of water sports, hikers and cyclists.

A good mix of industries 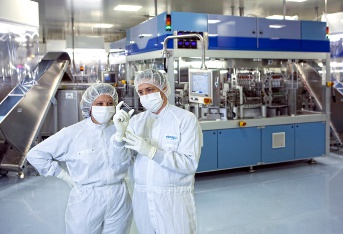 The most important industries at the business location of Schwerin are: mechanical engineering and the automotive industry, the plastics industry, the food industry, the aviation industry, the health care sector and medical technology, IT as well as tourism.

You are interested in the Schwerin location? Get in touch with our contact partners – We would be delighted to assist you.

Our key services at a glance: